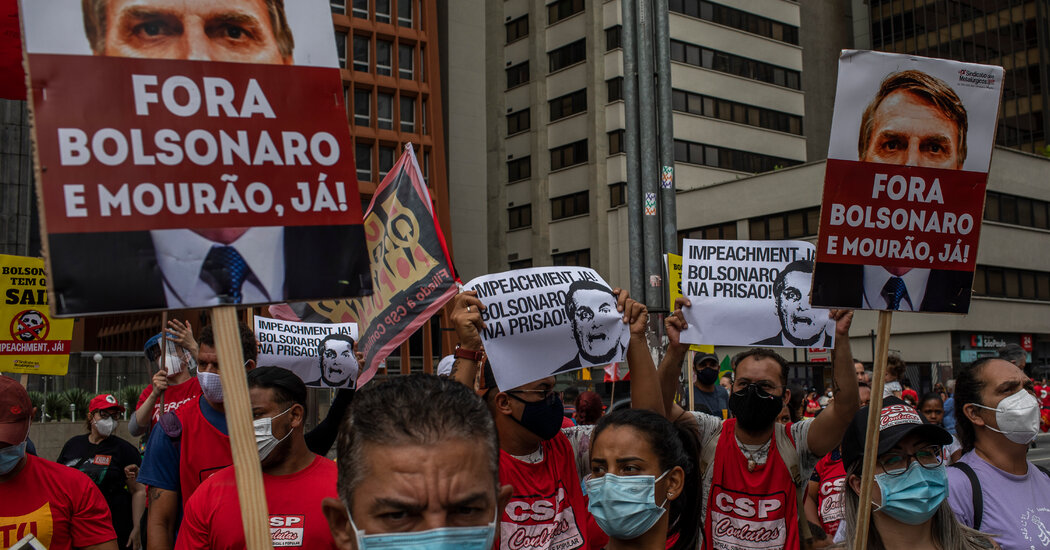 Calls to charge Bolsonaro with homicide

Jair Bolsonaro, the Brazilian president, should face mass homicide charges over his mishandling of the pandemic, according to a forthcoming report from a panel of 11 Brazilian senators. It represents the depths of anger against a leader who has refused to take the pandemic seriously.

The report, excerpts of which were viewed by The Times ahead of its scheduled release this week, asserts that Bolsonaro let the coronavirus rip through the country and kill hundreds of thousands in a failed bid to achieve herd immunity in Brazil and revive the economy. It also recommends criminal charges against 69 other people, including three of Bolsonaro’s sons.

The report may prove a major escalation of the challenges confronting Bolsonaro as he faces re-election next year, though it is uncertain whether the report from the panel — which includes seven of Bolsonaro’s opponents — will lead to any actual criminal charges.

Details: Over nearly 1,200 pages, the report effectively blames Bolsonaro’s policies for the deaths of more than 300,000 Brazilians, half the nation’s coronavirus death toll, and urges the Brazilian authorities to imprison the president.

In the eight months since the military junta seized power in Myanmar, roughly 15,000 people have left for India. Many are terrified farmers and families with children, fleeing the armed forces that continue to seek out and eliminate resistance along the country’s border.

The Tatmadaw, as Myanmar’s military is known, has targeted areas that are home to thousands of armed civilians who call themselves the People’s Defense Force. Soldiers have fired rocket launchers into residential neighborhoods, burned down homes, cut off internet access and food supplies, and even shot at fleeing civilians, according to residents.

Aid groups say they are preparing for a flood of refugees, but are concerned that neighboring countries like Thailand may push them back. In Chin State in northwestern Myanmar, an entire town of roughly 12,000 people has nearly emptied out. Residents have reported a large buildup of troops in recent weeks, signaling a potentially wider crackdown and leaving many people desperate to escape.

First person: After troops burned down his home, Ral That Chung decided he had no choice but to leave his home in Chin State for India. “I love Myanmar, but I will return only if there is peace,” he said. “It’s better to suffer here than to live in fear in my own country.”

Quotable: “The brutality in which entire villages are attacked indiscriminately has created a horrific situation in which people are absolutely desperate,” said Tom Andrews, the U.N. special rapporteur on human rights in Myanmar. “And things are getting worse.”

Russia’s climate contradictions are on display on the 600-mile-long Pacific island of Sakhalin, where the country intends to build a wind park — and to use the clean energy generated by its turbines toward mining more coal.

Russia is scrambling to retain the wealth and power that come from selling fossil fuels, even as the Kremlin increasingly acknowledges climate change to be a human-made crisis that needs to be addressed.

Though Vladimir Putin, the Russian president, said last week that the country would curb its emissions by 2060, it’s unclear if the pledge is sincere. Some elements of Russia’s approach have prompted skepticism, including the heavy reliance on forests to absorb carbon dioxide, and continued investment in oil, gas and coal.

Economics: The E.U.’s plans for tariffs on heavily polluting countries threaten exports from Russia, the fourth biggest among nations in terms of greenhouse gas emissions. International pressure has been “a real lever” forcing Russia to reduce emissions, a former Kremlin official said.

Rameh, a Palestinian town surrounded by olive groves, has long had a reputation for producing especially good oil. Fresh out of the press, it is bright liquid gold, its aroma reminiscent of the wild grasses and dandelion leaves that grow around the olive trees.

“Look, everybody thinks their oil is the best,” said Yousef Hanna, the chef of the acclaimed Israeli restaurant Magdalena, “but the olive oil from Rameh is smooth and doesn’t burn. It’s like a ripe fruit: pungent but sweet.”

A musical mission to help a language

In August, Lorde put out her third record, “Solar Power.” Three weeks later, she released “Te Ao Marama,” an EP with five of the album’s songs translated into Maori, the Indigenous language of New Zealand. It’s part of an effort in her native country to boost a language that, not long ago, experts feared could die out, Brian Ng reports.

Beginning in the 1850s, the country’s European settler government punished children who spoke the language at school and isolated Maori families by embedding them in white neighborhoods. New Zealand declared Te Reo Maori an official language in 1987, but by then most of its speakers were older.

Awareness and celebration of Maori music is mirroring a shift in attitudes toward the language across New Zealand. Jacinda Ardern, New Zealand’s prime minister, said in 2018 that her newborn daughter would learn both Maori and English. Newscasters now greet in Maori; weather reporters call places by their original Maori names; and supermarket signs are in both English and Maori.

Language revitalization is “a never-ending battle,” Sir Timoti Karetu, an expert on Maori language, said. “All of us who have been colonized by somebody else are struggling for our languages to survive.”