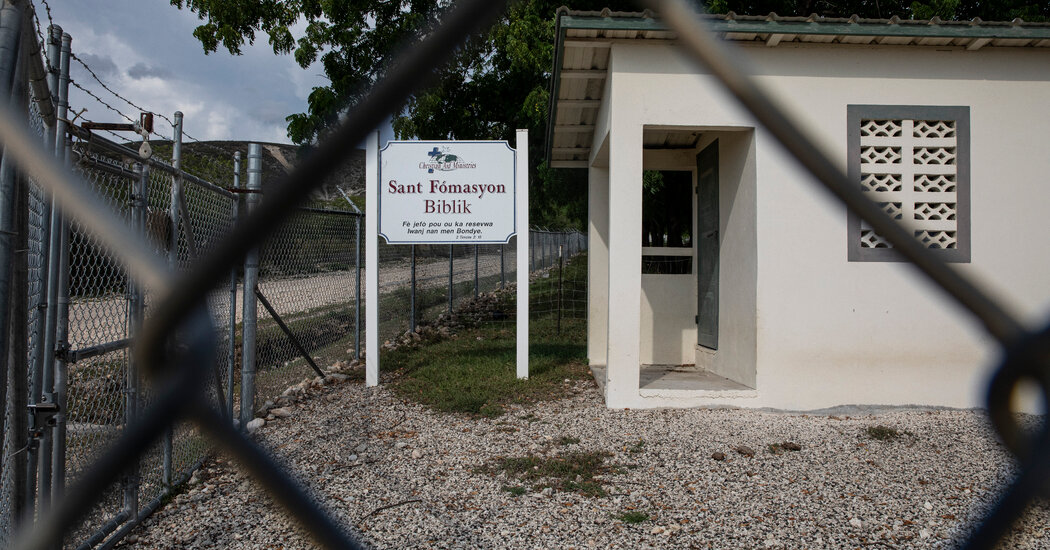 A U.S. government team is working with the American Embassy and the authorities in Haiti to recover a group of kidnapped Christian Aid Ministries missionaries and their children, U.S. officials said yesterday.

The brazen attack, in which 17 people were kidnapped, is the most recent example of a lack of security in Haiti. Small peaceful protests erupted yesterday across the country, with groups in at least eight towns and cities demanding a government crackdown on the increasingly powerful gangs.

The audacity of the gangs and the police’s inability to contain them have rekindled discussion about the possibility of deploying police and security officers from other countries. By many estimates, about half the capital is under the command of armed criminal groups, many of which use kidnappings to raise money.

Details: The group is believed to have been taken by the 400 Mawozo gang, a growing menace in Port-au-Prince. The gang has increased its territorial control over the past year, while the government has struggled to cope with natural disasters and the assassination of the country’s president in July. The killing remains unsolved.

Russia plans to cease its diplomatic engagement with the North Atlantic Treaty Organization, Sergey Lavrov, the Russian foreign minister, said yesterday, in the latest sign of unraveling relations between Moscow and the West. The announcement was not apparently accompanied by any military moves by Russia threatening European security.

By early next month, Russia will halt the activities of its representative office at NATO headquarters in Brussels and withdraw diplomatic credentials from emissaries of the alliance working in Moscow. “Because of NATO’s targeted steps, proper conditions for elemental diplomatic activity don’t exist,” Lavrov said.

NATO’s response was muted. “We have taken note of the decision by Russia to suspend the work of its diplomatic mission,” a spokeswoman, Oana Lungescu, said. “NATO’s policy toward Russia remains consistent. We have strengthened our deterrence and defense in response to Russia’s aggressive actions, while at the same time we remain open to dialogue.”

Context: The breakoff of diplomatic ties comes as President Biden is seeking to strengthen the European alliance after Donald Trump denigrated members as freeloaders on American military spending and threatened to withdraw.

As part of the Reagan administration, Powell helped to negotiate arms treaties and an era of cooperation with Mikhail Gorbachev, then the Soviet president. He was the architect of the invasion of Panama in 1989 and of the Persian Gulf war in 1991, which ousted Saddam Hussein from Kuwait but left him in power in Iraq.

By the time he retired in 1993, Powell was the most popular public figure in America. But his return to service in 2001 as secretary of state was difficult. He clashed with conservatives on George W. Bush’s foreign policy team, and his address to the U.N. in 2003 helped pave the way for the U.S. to go to war in Iraq, a speech he later said he regretted.

Cause of death: Powell had been vaccinated and had received treatment for multiple myeloma, which compromised his immune system, a spokeswoman said. He had been scheduled to receive a booster shot last week but could not because he had fallen ill.

A new antimachismo hotline in Bogotá, the Colombian capital, takes calls from men struggling with jealousy, control and fear — and challenges long-held assumptions about masculinity.

“I believed, and others believed, that men who commit violence would not call us to ask for help,” said one of the psychologists working at the hotline. “But something is happening, and maybe it’s that those old masculine models don’t work anymore.”

How a nuclear bomb could save the earth

An atomic blast is not the preferred solution for planetary defense, but 3-D models are helping scientists prepare decades ahead of time should a stray asteroid come calling, Robin George Andrews reports for The Times.

The focus is on relatively small asteroids, about the size of football stadiums, which are notable for their abundance as well as their ability to evade asteroid-hunting observatories. The shock wave from a 200-feet meteor that exploded over Siberia in 1908 leveled 800 square miles of forest — the size of the entire Washington, D.C., metro area.

A stealthy asteroid as long as 330 feet could be annihilated by a one-megaton nuclear device, with 99.9 percent of its mass being blasted out of Earth’s way, if the asteroid is attacked at least two months before impact, scientists reported in a study published this month.

Using a nuclear blast to obliterate an interplanetary interloper “will always be the last resort,” said Patrick Michel, an asteroid expert at the Observatoire de la Côte d’Azur who was not involved in the study. But if we are short on time, it may be our only hope.

Read more about preparations for a worst-case scenario.