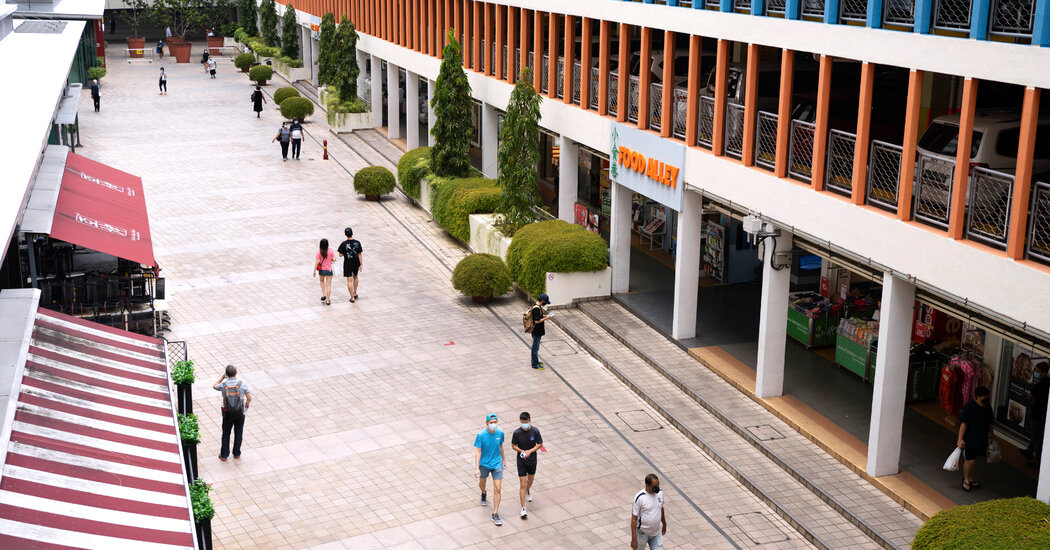 Vaccines were supposed to be the city-state’s ticket back to normalcy. But even with an 83 percent vaccination rate, Singapore is not opening up.

Instead, the government reinstated restrictions and urged people to work from home. For many residents, there was a feeling of whiplash and nagging questions about what it would take to reopen if vaccines were not enough.

But even though nearly all infections, 98.4 percent, present mild or no symptoms, the country is unaccustomed to large outbreaks. It’s a sobering case study for nations like New Zealand and Australia that are trying to transition from a zero-Covid strategy.

Background: Singapore’s initial handling of the coronavirus was widely considered a success. It closed its borders, tested and traced aggressively and was one of the first countries in Asia to order vaccines.

What’s next: One vision of how the pandemic might play out in Singapore includes face masks, limited travel and social distancing, perhaps until 2024.

Quotable: “In a way, we are a victim of our own success, because we’ve achieved as close to zero Covid as we can get and a very, very low death rate,” said an infectious disease specialist. “So we want to keep the position at the top of the class, and it’s very hard to do.”

The self-ruled island has moved to the heart of U.S.-China tensions. The saber rattling between the superpowers could ignite a military conflict and, ultimately, reshape the regional order.

“Nobody should underestimate the staunch determination, firm will and powerful ability of the Chinese people to defend national sovereignty and territorial integrity,” Xi Jinping, China’s leader, said on Saturday, almost a week after dozens of Chinese warplanes tested Taiwan’s beleaguered air defenses.

China’s growing military might has made a conquest conceivable, but few believe it is inevitable. The economic and diplomatic aftershocks would be staggering for Beijing.

Analysis: The U.S. wants to thwart any invasion but has watched its military dominance in Asia erode. In October 2020, when the Pentagon simulated a war game, the American team struggled against new Chinese weaponry.

Brinkmanship: Many Chinese officials believe that U.S. power has faltered as the country continues to limp through the politically divisive and economically devastating pandemic.

China has outlawed a practice in which parents kidnap and conceal their own children in a bid to get sole custody. Over the past few years, tens of thousands of children have been abducted and hidden.

The kidnappings rose with the divorce rate. By one estimate, fathers are behind 60 percent of the apprehensions. The abductions involve mostly sons younger than 6, reflecting the traditional emphasis on boys as carriers of the family name.

Background: Chinese custody battles are notoriously acrimonious. Courts rarely grant joint custody, and judges often opt to keep children in their existing living environment. Some abductions are part of a broader pattern of domestic violence, which affects about one in three families.

Numbers: In 2019, experts estimate that parents hid about 80,000 children. Many say the figures are most likely higher.

Quotable: “It’s become almost a game — whoever has physical custody has legal custody,” said one advocate. “It’s a free-for-all.”

Asia and the Middle East

In Rwanda’s capital, milk bars are a popular place to come together, reminisce about rural life and enjoy a favorite national drink. “When you drink milk,” said a motorcycle taxi driver, who drinks at least three liters daily, “you always have your head straight and your ideas right.”

The State of Vaccine Mandates in the U.S.

The pandemic struck India hard. For the past 18 months, the country has grappled with lockdowns, internal-migration crises and soaring outbreaks.

But the coronavirus has also forced the art scene to rethink and recalibrate. Some artists, often unable to get to their studios to produce large pieces, made smaller-format works or played with different materials. Galleries, trying to stay afloat, collaborated in digital exhibitions and opened up online viewing rooms.

“There were no art fairs, there was no glamour, and we were reduced to the most important part of the art world, the act of making the art,” said Aparajita Jain, who co-leads a premier contemporary art gallery in New Delhi.

It has worked. A crop of new collectors discovered galleries and artists in part through online connections, and have begun buying with gusto. Since the pandemic started, sales of Indian modern and contemporary art have repeatedly set records at auction.