‘What Have We Done With Democracy?’ A Decade On, Arab Spring Gains Wither 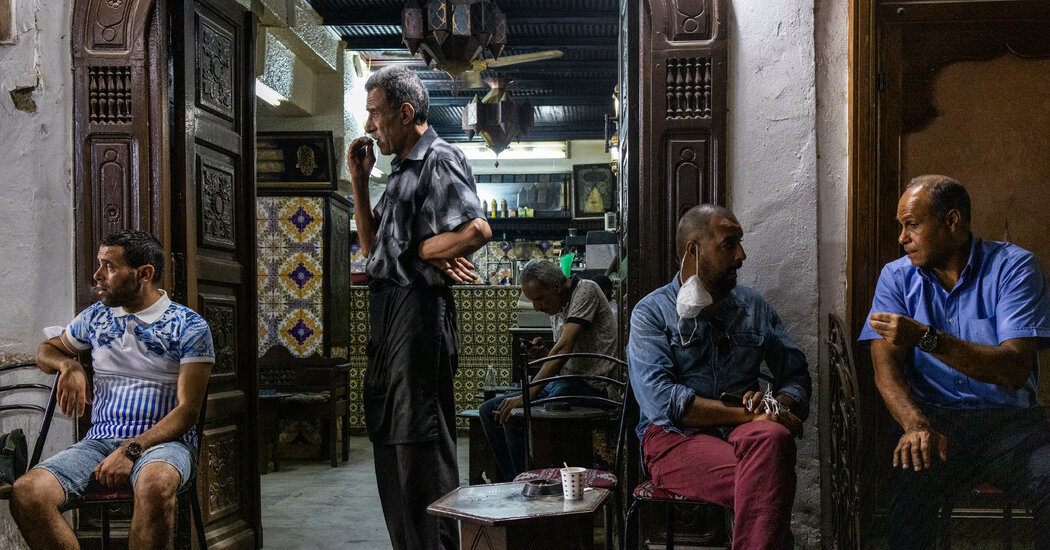 TUNIS, Tunisia — For roughly three months after Tunisians toppled their dictator in January 2011 in an eruption of protest that electrified the Arab world, Ali Bousselmi felt nothing but “pure happiness.”

The decade that followed, during which Tunisians adopted a new Constitution, gained freedom of speech and voted in free and fair elections, brought Mr. Bousselmi its own rewards. He co-founded a gay rights group — an impossibility before 2011, when the gay scene was forced to hide deep underground.

But as the revolution’s high hopes curdled into political chaos and economic failure, Mr. Bousselmi, like many Tunisians, said he began to wonder whether his country would be better off with a single ruler, one powerful enough to just get things done.

“I ask myself, what have we done with democracy?” said Mr. Bousselmi, 32, the executive director of Mawjoudin, meaning “We Exist” in Arabic. “We have corrupt members of Parliament, and if you go into the street, you can see that people can’t even afford a sandwich. And then suddenly, there was a magic wand saying things were going to change.”

That wand was held by Kais Saied, Tunisia’s democratically elected president, who, on July 25, froze Parliament and fired the prime minister, vowing to attack corruption and return power to the people. It was a power grab that an overwhelming majority of Tunisians greeted with joy and relief.

July 25 has made it harder than ever to tell a hopeful story about the Arab Spring.

Held up by Western supporters and Arab sympathizers alike as proof that democracy could bloom in the Middle East, Tunisia now looks to many like a final confirmation of the uprisings’ failed promise. The birthplace of the Arab revolts, it is now ruled by one-man decree.

Elsewhere, wars that followed the uprisings have devastated Syria, Libya and Yemen. Autocrats smothered protest in the Gulf. Egyptians elected a president before embracing a military dictatorship.

Still, the revolutions proved that power, traditionally wielded from the top down, could also be driven by a fired-up street.

It was a lesson the Tunisians, who recently flooded the streets again to demonstrate against Parliament and for Mr. Saied, have reaffirmed. This time, however, the people lashed out at democracy, not at an autocrat.

“The Arab Spring will continue,” predicted Tarek Megerisi, a North Africa specialist at the European Council on Foreign Relations. “No matter how much you try to repress it or how much the environment around it changes, desperate people will still try to secure their rights.”

Mr. Saied’s popularity stems from the same grievances that propelled Tunisians, Bahrainis, Egyptians, Yemenis, Syrians and Libyans to protest a decade ago — corruption, unemployment, repression and an inability to make ends meet. Ten years on, Tunisians felt themselves backsliding on virtually everything except freedom of expression.

“We got nothing out of the revolution,” said Houyem Boukchina, 48, a resident of Jabal Ahmar, a working-class neighborhood in the capital, Tunis. “We still don’t know what the plan is, but we live on the basis of hope,” she said of Mr. Saied.

Mindful of their people’s simmering grievances, Arab rulers have doubled down on repression instead of addressing the issues, their ruthlessness only inviting more upheaval in the future, analysts warned.

In Mr. Saied’s case, his gambit depends on economic progress. Tunisia faces a looming fiscal crisis, with billions in debt coming due this fall. If the government fires public workers and cuts wages and subsidies, if prices and employment do not improve, public sentiment is likely to U-turn.

An economic collapse would pose problems not only for Mr. Saied, but also for Europe, whose shores draw desperate Tunisian migrants in boats by the thousands each year.

Yet Mr. Saied’s office has not made any contact with the International Monetary Fund officials who are waiting to negotiate a bailout, according to a senior Western diplomat. Nor has he taken any measures other than requesting chicken sellers and iron merchants to lower prices, telling them it was their national duty.

“People don’t necessarily support Saied, they just hated what Saied broke,” Mr. Megerisi said. “That’s going to be gone pretty quickly when they find he’s not delivering for them, either.”

For Western governments, which initially backed the uprisings then returned in the name of stability to partnering with the autocrats who survived them, Tunisia may serve as a reminder of what motivated Arab protesters a decade ago — and what could bring them into the streets again.

While many demonstrators demanded democracy, others chanted for more tangible outcomes: an end to corruption, lower food prices, jobs.

From outside, it was easy to cheer the hundreds of thousands of protesters who surged into Cairo’s Tahrir Square, easy to forget the tens of millions of Egyptians who stayed home.

“The people pushing for Parliament, democracy, freedoms, we weren’t the biggest part of the revolution,” said Yassine Ayari, an independent Tunisian lawmaker recently imprisoned after he denounced Mr. Saied’s power grab. “Maybe a lot of Tunisians didn’t want the revolution. Maybe people just want beer and security. That’s a hard question, a question I don’t want to ask myself,” he added.

“But I don’t blame the people. We had a chance to show them how democracy could change their lives, and we failed.”

The revolution equipped Tunisians with some tools to solve problems, but not the solutions they had expected, Mr. Ayari said. With more needs than governing experience, he said, they had little patience for the time-consuming mess of democracy.

A Constitution, the ballot box and a Parliament did not automatically give rise to opportunity or accountability, a state of affairs that Westerners may find all too familiar. Parliament descended into name-calling and fistfights. Political parties formed and re-formed without offering better ideas. Corruption spread.

“I don’t think that a Western-style liberal democracy can or should be something that can just be parachuted in,” said Elisabeth Kendall, an Oxford University scholar of Arabic and Islamic studies. “You can’t just read ‘Liberal Democracy 101,’ absorb it, write a constitution and hope that everything works out. Elections are just the start.”

Arab intellectuals often point out that it took decades for France to transition to democracy after its revolution. Parts of Eastern Europe and Africa saw similar ups and downs in leaving dictatorships behind.

Opinion polls show that emphatic majorities across the Arab world still support democracy. But nearly half of respondents say their own countries are not ready for it. Tunisians, in particular, have grown to associate it with economic deterioration and dysfunction.

Their experience may have left Tunisians still believing in democracy in the abstract, but wanting for now what one Tunisian constitutional law professor, Adnan Limam, approvingly called a “short-term dictatorship.”

Still, Ms. Kendall cautioned that it is too soon to declare the revolutions dead.

In Tunisia, rejection of the system that evolved over the last decade does not necessarily imply embrace of one-man rule. As Mr. Saied has arrested more opponents and taken more control, last month suspending much of the Constitution and seizing sole authority to make laws, more Tunisians — especially secular, affluent ones — have grown uneasy.

“Someone had to do something, but now it’s getting off-track,” said Azza Bel Jaafar, 67, a pharmacist in the upscale Tunis suburb of La Marsa. She said she had initially supported Mr. Saied’s actions, partly out of fear of Ennahda, the Islamist party that dominates Parliament and that many Tunisians blame for the country’s ills.

“I hope there’ll be no more Islamism,” she said, “but I’m not for a dictatorship either.”

Some pro-democracy Tunisians are counting on the idea that the younger generation will not easily surrender the freedoms they have grown up with.

“We haven’t invested in a democratic culture for 10 years for nothing,” said Jahouar Ben M’barek, a former friend and colleague of Mr. Saied’s who is now helping organize anti-Saied protests. “One day, they’ll see it’s actually their freedom at risk, and they’ll change their minds.”

Others say there is still time to save Tunisia’s democracy.

Despite Mr. Saied’s increasingly authoritarian actions, he has not moved systematically to crack down on opposition protests, and recently told the French president, Emmanuel Macron, that he would engage in dialogue to resolve the crisis.

“Let’s see if democracy is able to correct itself by itself,” said Youssef Cherif, a Tunis-based political analyst, “and not by the gun.”

“I don’t know. Will I accept forgetting about my activism for the sake of the economy?” Mr. Bousselmi said. “I really want things to start changing in the country, but we’ll have to pay a very heavy price.”