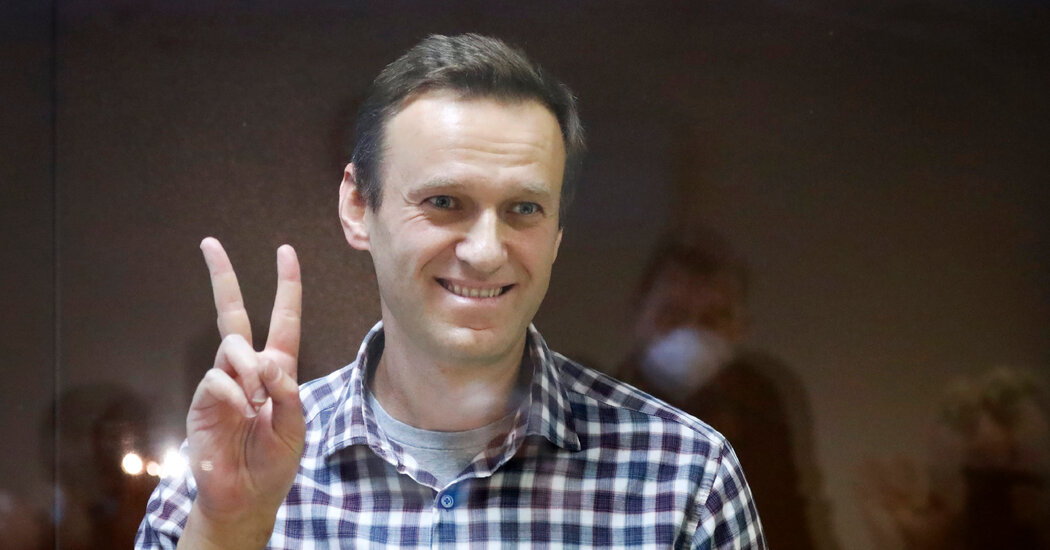 LONDON — Aleksei A. Navalny, Russia’s most prominent opposition leader, who for a decade challenged the Kremlin in street protests and elections, survived an assassination attempt and is now in a Russian prison, on Wednesday was awarded the Sakharov Prize for Freedom of Thought, the European Union’s top human rights award.

Through it all, Mr. Navalny has never let up in his advocacy for peaceful political change in Russia’s faltering democracy. He was awarded the prize while serving a more than two-year sentence in a Russian penal colony.

The prize was as much a recognition of Mr. Navalny’s decade-long role leading the Russian political opposition against great odds as a stinging rebuke of President Vladimir V. Putin, whom Mr. Navalny accused of subverting his country’s post-Soviet democracy to remain in power. Mr. Navalny has also accused Mr. Putin of ordering his assassination.

Referring to Mr. Navalny, David Sassoli, the president of the European Parliament, wrote on Twitter, “He has fought tirelessly against the corruption of Vladimir Putin’s regime.”

“This cost him his liberty and nearly his life,” Mr. Sassoli added. “Today’s prize recognizes his immense bravery and we reiterate our call for his immediate release.”

Despite repeated arrests and attacks, Mr. Navalny has remained an unflinching critic of Mr. Putin, a former K.G.B. officer whom he says corruptly skimmed Russia’s oil profits to enrich his friends and his entourage in the security services, and in that way keep a hold on power.

Defying expectations, Mr. Navalny used street politics and social media to build a tenacious opposition movement even after much of the independent news media was squelched and other critics were driven into exile or killed in unsolved murders.

The other finalists for this year’s Sakharov Prize were a group of prominent Afghan women who pushed for equality and human rights in Afghanistan and Jeanine Áñez, the former interim president of Bolivia, who served for a year after former president Evo Morales was forced out in 2019.

Established in 1988, the prize is named after the nuclear physicist and Nobel Peace laureate, Andrei D. Sakharov, who led the Soviet Union’s development of the hydrogen bomb and subsequently became an indefatigable advocate for human rights.

Past winners include Nelson Mandela; Malala Yousafzai, a Pakistani activist for women’s rights who went on to win the Nobel Peace Prize; and Ilham Tohti, a prominent Uyghur intellectual who spent two decades trying to defuse tensions between oppressed Muslim Uyghurs in China and the Han people, who are the dominant ethnic group in that country. Mr. Navalny, who is 45, had been considered a front-runner for the Nobel Peace Prize this year.

Last year, the Sakharov Prize was awarded to the democratic opposition of Belarus represented by the Coordination Council, an initiative of women, political and civil society figures in the country.

The collective organized peaceful mass protests that saw thousands of Belarusians take to the streets last year after the presidential election in August to demonstrate against Aleksandr G. Lukashenko’s claim of a landslide victory. Mr. Lukashenko is sometimes called “Europe’s last dictator.”

This year’s prize was awarded as the European Parliament celebrates the 100th anniversary of Mr. Sakharov’s birth, in 1921.