Florida’s Board of Education approves cutbacks to 8 school districts over mask mandates. 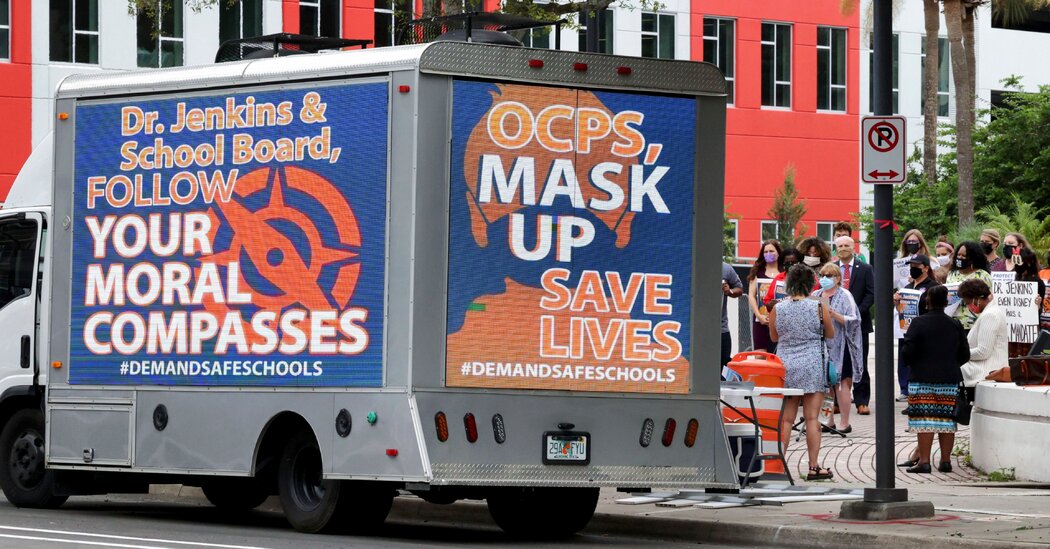 The political battle in Florida over masks in schools escalated this week, as the state Board of Education voted to authorize sanctions on eight local school districts for not following instructions from Gov. Ron DeSantis’ administration that make masks optional.

The eight districts, whose boards all voted to require masks in school buildings, could face cutbacks equal to their school board members’ salaries unless, according to the Tampa Bay Times, they show within 48 hours that they are in compliance with state orders. The districts are in Alachua, Brevard, Broward, Duval, Leon, Miami-Dade, Orange and Palm Beach counties.

The measure was approved unanimously during a conference call meeting on Thursday by the State Board of Education, all of whose members are appointees by Republican governors. The vote came after superintendents from the eight districts argued their mask policies had been effective at curbing the spread of the virus.

After the vote, one of the superintendents, Alberto M. Carvalho of Miami-Dade County Public Schools, noted on Twitter there had been “no major outbreaks” in his district and that student cases had been declining after a spike in early September.

“We disagree with today’s State Board of Education’s recommendation and wholeheartedly believe that we are in compliance with law, reason, and science,” he said in a Twitter post.

But the state board said that the county school boards had “willingly and knowingly violated the rights of students and parents by denying them the option to make personal and private health care and educational decisions for their children.”

Masks in schools have become the center of a fiercely partisan debate in Florida, Texas, Arizona and other states whose Republican governors oppose mask mandates as an infringement on personal liberties. In late July, Governor DeSantis, a possible Republican presidential candidate, signed an executive order directing state officials to ensure parents have the power to decide whether children wear masks in school.

The Centers for Disease Control and Prevention recommended that all students, teachers and employees wear masks, regardless of their vaccination status. Most masks offer far more protection to others than to the person wearing them, dispersing the exhaled aerosols that carry the coronavirus in an infected person. So individual masking undermines the protection the masks offer.

President Biden, a Democrat, has openly criticized the Republican governors blocking local mask mandates, and the federal Department of Education has started investigating whether such policies in five states violate the civil rights of disabled students.

The State of Vaccine Mandates in the U.S.

Lawsuits have also been filed in a number of states, including Florida, challenging bans on mask mandates. In late August, a federal judge said that Florida’s the state constitution allowed school districts to impose strict mask mandates on students, handing Mr. DeSantis a defeat. The state asked an appellate court to reverse the ruling, which has been stayed temporarily pending a final decision.

On Thursday, the Florida school board maintained that a “parents’ bill of rights” enacted by state lawmakers earlier this year gave parents the sole right to decide if their children should wear masks. The board’s statement said that the law requires districts and schools to “protect parents’ right to make health care decisions such as masking of their children in relation to Covid-19.’’

“Every school board member and every school superintendent has a duty to comply with the law, whether they agree with it or not,” the chairman of the state board, Tom Grady, said in the statement.

The L.A. sheriff rejects the county’s vaccine mandate for his officers, saying too many would quit. »