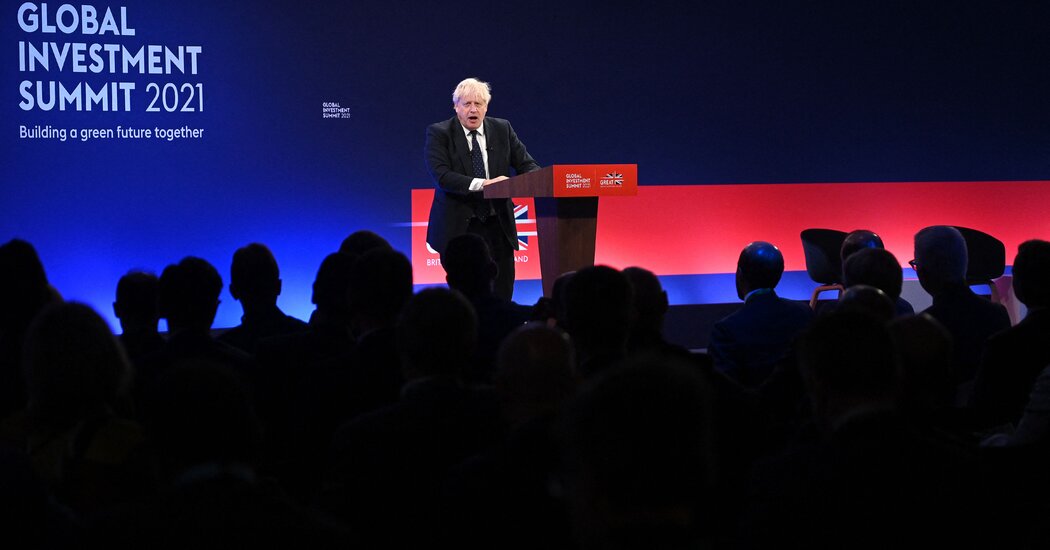 LONDON — Two weeks before a global summit on climate change that some fear is already foundering, Prime Minister Boris Johnson of Britain on Tuesday tried to recapture momentum by announcing a host of measures to bolster his own country’s push toward carbon neutrality.

The British government published documents outlining plans for a big expansion of electric vehicles, more offshore wind power and greater use of hydrogen.

But Mr. Johnson’s efforts to make Britain a pacesetter on climate change could face economic and political headwinds at home. And there is little evidence that it will galvanize global action at a time when the leaders of several of the world’s largest carbon emitters are expected to stay away from the two-week conference in Glasgow.

President Xi Jinping of China, the world’s most populous nation, is not expected to attend the event, called Cop26, in person, and Prime Minister Narendra Modi of India has yet to decide whether he will come. Nor has Russia’s president, Vladimir V. Putin, committed to attending, although Downing Street hopes he might.

The spotty guest list even drew criticism from Queen Elizabeth, who never openly comments on political issues but who was caught on camera last week doing so at the opening of the Welsh Parliament. “I still don’t know who’s coming,” she said, appearing to express impatience with the leaders by adding: “they talk, but they don’t do.”

There is more than royal protocol at stake because, without ambitious offers by the United States and China, the Glasgow conference could fizzle, climate-change experts said. After months of projecting confidence, even Mr. Johnson himself has played down hopes of a big breakthrough.

“Cop was always going to be extremely tough,” he said on Monday in an interview with Bloomberg News. “We’re going to need to see some real action from the participants.”

While that might be a tactical move in the hope that the summit exceeds lowered expectations, Mr. Johnson faces a significant challenge, analysts say.

Tom Burke, chairman of E3G, an environmental think tank and a former government adviser, said Mr. Johnson needs to persuade leaders who attend to give a strong signal to their negotiators to strike an ambitious agreement.

“That’s the test of the prime minister: can he get his peers to give the high ambition signals he is asking for; he’s not going into this with a lot of capital,” said Mr. Burke, referring to cuts in Britain’s international development aid and the country’s adversarial post-Brexit relationship with the European Union.

“Britain has a legitimate claim to have led the world over climate change, the question is whether the prime minister has enough guns with his peers,” he added.

President Biden plans to travel to Glasgow, but his climate agenda is at risk of being radically scaled back in the budget wrangling on Capitol Hill. Sen. Joe Manchin III, the West Virginia Democrat whose vote is critical to the passage of legislation, has opposed the White House’s signature clean-electricity initiative, which would replace coal- and gas-fired power plants with wind, nuclear, and solar energy.

White House officials are now rewriting the legislation with other measures that could cut carbon emissions. But with less than two weeks before the conference begins, Mr. Biden is likely to arrive in Glasgow without something concrete to offer.

Britain sees itself as a world leader in climate change and has promised to achieve carbon neutrality by 2050. But experts have been waiting for details on how that target can be achieved, something the government tried to redress on Tuesday with several long-awaited documents.

They included a pledge to draw in 90 billion pounds, or about $124 billion, of private investment for a green energy transition that would support 440,000 jobs by 2030. That would help Britain to meet its target of cutting greenhouse gas emissions to a level 68 percent below 1990 levels by 2030, then delivering a “decarbonized economy” by 2050.

Britain wants to end its reliance on fossil fuel electricity by 2035 if possible and, alongside wind and other renewable energy, the government plans to secure financing for at least one new nuclear plant by 2024.

Britons will be offered a subsidy to upgrade heating systems and shift from gas to more expensive heat pumps and there will be more cash for tree planting.

Environmental groups said the plans did not go far enough. “Extra cash for tree planting and progress on electric vehicles doesn’t make up for the lack of concrete plans to deliver renewables at scale, extra investment in public transport, or a firm commitment to end new oil and gas licenses,” said Rebecca Newsom, head of UK politics at Greenpeace.

And, while Mr. Johnson prepares for Glasgow, members of the royal family — as well as the queen — have been vocal in their commitment to combating climate change. Prince William, the queen’s grandson, handed out his Earth Shot prizes for innovative projects in climate and the environment, while taking a veiled shot at billionaires like Jeff Bezos and Richard Branson, who have recently gone on privately financed spaceflights.

“We need some of the world’s greatest brains and minds fixed on trying to repair this planet, not trying to find the next place to go and live,” William said in an interview with the BBC.

His father, Prince Charles, a longtime environmental activist, told another interviewer that his car, a specially modified Aston Martin, runs on “surplus English white wine and whey from the cheese process.” He was referring to a bioethanol fuel that is manufactured from byproducts of wine and cheese fermentation.

« ‘Four Hours at the Capitol’ grimly recounts the events of Jan. 6 in a taut HBO documentary